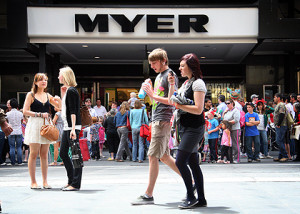 Thanks Laurel Papworth for this insightful blog & article in the Australian which inspired this blog.

Myer received a thrashing on social media in early May over the CEO’s negative comments regarding the introduction of the NDIS (National Disability Insurance Scheme) to better fund services for those in the community with disabilities. Bernie Brooks believed that it would impact discretionary spending, which would be bad for Myer’s business / profits.

The reason the backlash was so strong was that it struck a nerve – it pitted commercial imperatives (profits, market share, discretionary spend) with a general feeling in the community that yes, we can do this to support others in the community who are doing it tough. It made Myer seem terribly out of touch, lacking in empathy and generosity. From a brand point of view, this was incredibly poor brand and media management.

The immediacy, poignancy and power of customer feedback in the social age is under estimated and sometimes poorly managed by unaware C-Suite players. This issue triggered people’s deeper values and they responded – it showed the sharp contrast in the CEO’s values and concerns and those of the customer / community. An organisation does not operate in isolation from the community it serves. As a Myer shareholder I’m disappointed by the comments and the naive vacuum in which they were made. As a community member I’m saddened that the CEO is so out of kilter with the customers and community in which his business operates. I’m not surprised the share price suffered – and this is the interconnectedness of it all – Bernie Brooks wants to protect shareholder value and employee jobs – yet he cannot do that from a perspective of being separate to the world in which his business operates.

In this world of transparency, openness, immediate communication and sharing of information everything counts – who you really are, what really matters to you, what you and your brand truly value – are all on display at every moment.

Myer initially responded by trying to say that its comments were taken out of context – I don’t think so. Myer missed the biggest context in which it’s comments were made – we are all connected and businesses that make profits in a community have a responsibility to uphold the concerns and interests of that community. As employees, customers and shareholders we all know someone with a disability, we know their carers, we know how difficult their lives are, we know they struggle and we don’t feel good about that. That knowledge, that larger context drove the backlash – it spoke to the pain we all experience in a society where people are suffering – they are not separate to us, they are part of us, they are our family, friends and neighbours.

Nothing operates in isolation anymore – it’s a complex, highly informed, ever changing world – CEOs have a responsibility to understand the whole context in which their business and brand(s) operate. Their leadership and stewardship in the face of tricky, uncertain dynamics is the job at hand.

You are encouraged to share this post with your network via your preferred platform or to reprint the content without changes. If you wish to reprint, please include this information.